With one drug to shut down its progression and another to undo its damage, plus a worldwide effort stalking the origins of multiple sclerosis, MS doesn’t stand a chance.

Alexandra Solal’s 47th year was remarkable by any measure: She climbed Mount Kilimanjaro, ran two half-marathons, completed a half-Ironman, and started a CrossFit gym habit before work with a friend. It was also the year she woke up half paralyzed. Determined not to alarm her son, she commando-crawled to her closet, dressed on the floor, and called her gym buddy to take him to school. “When my friend pulled in, she saw me propping myself up between our two cars and started to cry,” recalls Solal. “That’s when I knew it was bad.”

Solal’s story is more dramatic than most. Multiple sclerosis (MS) usually sets in with neurological symptoms that evolve over a few hours or days – eye pain, vision loss, double vision; numbness or tingling in the hands or feet; leg weakness; loss of balance. But the gradual onset belies the ferocity of the immune system’s attack on the myelin protecting our nerves. Just as the insulation on a power cord ensures electricity’s safe passage, myelin safeguards the passage of signals from our brain to the rest of our body. If myelin degrades, so does the messaging, until it breaks down entirely.

Stopping MS in Its Tracks

Yet, like her disease’s onset in 2013, Solal’s trajectory with MS will be dramatically different than that of patients diagnosed a generation ago.

Her neurologist, Stephen Hauser, MD, just announced a new MS drug that’s far more effective than high-dose interferon beta – a standard treatment – at reducing brain inflammation and lesions. Hauser, chair of neurology and Robert A. Fishman Distinguished Professor in Neurology, led the trial, which was sponsored by Hoffman-La Roche and conducted at over 200 centers worldwide in patients with the disease’s most common form, relapsing-remitting MS. The drug, ocrelizumab, targets a type of white blood cell called B-lymphocytes. Compared to interferon, ocrelizumab reduced clinical MS attacks, blocked the development of new myelin inflammation by over 95 percent, and delayed disability progression by 40 percent. 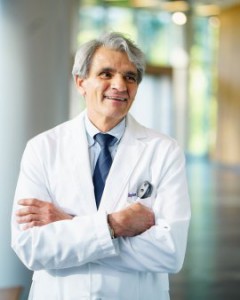 “The results were beyond spectacular,” says Hauser, who has been named inaugural director of the new UCSF Weill Institute for Neurosciences. “This therapy essentially stops the inflammatory relapsing form of MS in its tracks and appears to do so safely.” Hauser spent decades collaborating across institutions and industry and bucking convention to lay the groundwork for ocrelizumab.

More good news followed. There’s been no therapy for the primary progressive form of the disease (PPMS), which affects 10 to 15 percent of the 400,000 Americans with MS. But a related trial showed that ocrelizumab is 24 percent more effective than a placebo in slowing PPMS’s progression and staving off brain lesions and degeneration.

The next steps will be to develop evidence-based rules for using this well-tolerated and highly effective drug. Currently, physicians delay prescribing the most effective therapies, due to their toxicity. “We are optimistic that with aggressive therapy that can be given safely at the beginning of the disease, the long-term outcomes, which are measured in decades, will be far superior to what they are today,” says Hauser. “These results should allow us to ask if shutting down brain inflammation at a very early stage in the disease might prevent late progressive MS altogether.”

This is good news for both newly diagnosed patients like Solal and for those further into their journey with MS. UCSF scientists are shutting down MS from every angle: by killing, with ocrelizumab, the immune-system agents responsible for attacking myelin; by repairing damage already done; and by isolating ways to prevent MS’s onset.

Ari Green, MD, MCR, has the acute sense of time that MS clinicians and scientists develop. He points to slides showing a patient’s brain atrophying over seven years. Meter-long nerve fibers are exposed and broken. Green, the Debbie and Andy Rachleff Distinguished Professor in Neurology and director of UCSF’s Multiple Sclerosis Center and Neurodiagnostics Center, likens these fibers to bridges with missing sections so signals can’t span them.

At 10 or 15 years, people leave work; at 20 years, an overwhelming majority need help walking; and by 30 years, many are in wheelchairs. We’ve made progress with our new anti-inflammatory therapies, but it’s still not enough.

“Here’s how that damage impacts the patient,” explains Green, a resident alumnus. “At 10 or 15 years, people leave work; at 20 years, an overwhelming majority need help walking; and by 30 years, many are in wheelchairs. We’ve made progress with our new anti-inflammatory therapies, but it’s still not enough. Every patient already has damage even before we see them for the first time.”

Green and neuroscientist Jonah Chan, PhD, who also holds a Rachleff Distinguished Professorship in Neurology, hope to reverse nerve damage with a drug that induces cells to rewrap exposed axons with protective myelin – a process called remyelination. “We know that some axons in our MS patients’ brains lack myelin, and if we can get the myelin around them, we can salvage them and improve our patients’ quality of life and hopefully prevent progression,” says Green.

Their target is oligodendrocyte precursor cells, which mature into the oligodendrocytes that insulate the axons with myelin. These precursor cells are found throughout MS patients’ brains. “In some areas in MS brains, remyelination is actually occurring, but right next to it might be lesions where no repair is happening,” says Chan. “Something is halting these cells from remyelinating.”

Ever mindful of time, they decided to screen FDA-approved, readily available drugs to see if any had the potential to induce remyelination. Yet such a process is long and problematic. “First you have to isolate and grow neurons, then you have to coculture them with oligodendrocytes and stimulate myelin to form – all the while making sure the neurons remain healthy,” says Chan. “To screen a thousand drugs would literally take a lifetime, and you still wouldn’t know if the effects were cell autonomous to oligodendrocytes or an indirect effect on the neurons.”

Instead, Chan followed a hunch that changed the metrics and the rules entirely. Experts had long assumed that axons signaled oligodendrocytes that they needed wrapping. Chan suspected that if he took dead axons and put them in a petri dish with oligodendrocytes, they might actually start the myelination process anyway. “People thought he was crazy,” says Green, “but he was correct.”

Next, he spun out plastic nanofibers in the shape of axons. “The cells started to wrap the fibers, too,” Chan recounts. “So we no longer had to isolate and grow axons for modeling myelination.” Replicating the shape and size of the axon was enough to engage the oligodendrocytes.

This enabled them to radically hasten and simplify the process. “We found that if we take those fibers and fabricate them straight up like pillars in a dish, when you put the oligodendrocyte precursor cells with the pillars, they mature and wrap them,” says Chan. “If I make the base of the pillar large and taper it to a small tip, we could determine the extent of growth.” They could then easily compare the relative effectiveness of the drugs by examining how much of the pillars were wrapped.

Chan handed plates populated with pillars, plus 1,500 drug candidates, to a postdoc to test. “What we thought would take a lifetime took my postdoc two weeks,” recalls Chan. He identified multiple clusters of promising compounds – including an antipsychotic, a bronchodilator, and an antihistamine that shared a common trait. These compounds blocked acetylcholine receptors that inhibited precursor cells from differentiating and making myelin. After checking its safety profile, Green chose the antihistamine for further testing – and purchased 100 tablets on Amazon for $8.

After impressive lab results, they ran a clinical trial, measuring patients’ reaction times before and after taking the drug for a few months. The transmission speed of electrical signals in their brains improved – clear evidence the axons sending signals to their visual cortex were being remyelinated and their messaging capacity was being restored, though the effect was modest.

“In fact, this is the only drug in history that helps with brain repair,” says Green, “and it can be bought at Walgreens.” And from discovery to completed trial took just two-and-a-half years, rather than 10 to 20 years, which could translate to preventing patients from needing a wheelchair. Yet making the compound truly effective would require boosting the dose tenfold. “It has too many other side effects to take the dose up that high,” says Chan. “We’re confident there’s a better drug out there with a bigger payoff and fewer side effects.”

Green and Chan have accelerated the search by licensing their drug-testing technique to a company with libraries of millions of drugs and the capacity to look at every molecule ever designed to be given to people. “The most important thing about our trial might not even be this drug,” says Chan. “It might be that we’ve shown and can measure an effect for a drug in this space – brain repair.”

Nipping MS in the Bud

“With ORIGINS, we focus on the newly diagnosed patient, who had his or her first symptom yesterday,” says Sergio Baranzini, PhD, who has spent his career identifying genes associated with MS. Participating physicians throughout California and Nevada, upon hearing of telltale symptoms like tingling in hands, weakness in legs, or vision loss in one eye, contact, via a hot line, a team of UCSF neurologists who can immediately perform a detailed work-up – including a blood draw, an MRI, a visual assessment, B lymphocyte studies of spinal fluid and blood, and a stool sample. Results are delivered to the referring doctors fast.

Baranzini’s interest is in the stool sample. Here’s why: If one identical twin has multiple sclerosis, the other twin has only a 30-percent chance of having the disease. If the genome confers just a 30-percent risk, where’s the other 70 percent from? “What’s not genetic has to be the environment,” says Baranzini, who holds the Heidrich Family and Friends Endowed Chair in Neurology. “But how do you measure the environment?” Patients are notoriously bad at recalling exposures, especially from their early years.

About three years ago, he started collecting stool samples to see if MS patients had a different composition of gut bacteria than their spouses, despite similar environmental exposure. “Some bacterial species are more prevalent in MS patients, some less, but they are different,” says Baranzini. In collaboration with Mount Sinai, Caltech, and UC San Diego, he and colleagues introduced MS microflora into mice born in completely sterile environments. “When we induced the disease, they got very sick, much more so than mice receiving the spouse’s microflora,” says Baranzini. “That means the MS microflora has something that helps initiate or perpetuate the disease.”

Last year, Baranzini and his collaborators started the International Multiple Sclerosis Microbiome Study, involving specialists from all over, including Boston, Edinburgh, Buenos Aires and Munich. They hope to establish the characteristic MS microbiome by collecting samples from 2,000 patients and controls over three years. “If we know exactly what imbalance creates an environment for MS,” he says, “we can search for noninvasive, safe ways to restore it through probiotics, antibiotics, a combination, or a change of diet.”

So a targeted diet and supplements may keep MS from gaining traction, avoiding damage altogether. Or, if the disease does get a toehold, ocrelizumab may shut it down. And, soon, Chan and Green may perfect a remyelination agent to actually repair damage.

Multiple sclerosis is finally out of time. Solal, who just completed a competitive bike race benefiting MS research, will no doubt make good use of it.

UCSF Leads International Study on the Microbiome and Multiple Sclerosis

The White House Office of Science and Technology Policy:Announcing the National Microbiome Initiative